Join us for a complimentary virtual session led by Kevin Whalen, a distinguished, 10-year veteran of the US Army Special Forces, currently serving as an agent with Pinkerton Corporate Risk Management. While on active duty, Whalen was involved in multiple combat deployments, trained Army and police in five countries and supported counter terror, counter narcotics and joint intelligence operations. He has also worked as an Advanced Skill Instructor for US Special Operations Forces and is an in-demand college guest speaker on ethics and morality in combat. During the class, Mr. Whalen will: 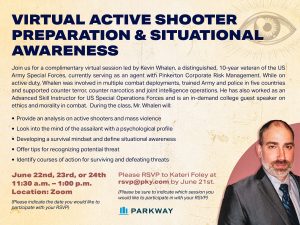 Thank you for your interest in Greenway Plaza. Please contact Leasing via email at leasing@pky.com or by phone at 832-308-6055 for any additional information you might like about your selection(s).
You have not added any listings to your collection yet
Download Collection